1) How did you meet and fall in love?

When Matt and I met, we both worked for the same organisation. We knew of each other and had seen each other around but had not yet been introduced. Two right swipes later and the rest was history.

Neither of us were expecting much to come of our budding romance. Matt was known to be a bit of a ladies man, and I was a hopeless romantic with a checklist so long, no one quite measured up to the man I thought I should be with.

There was a bit of a chase at the beginning (Matt was definitely the chaser). It wasn’t until my mum told me to give Matt a chance, that I actually took a second look and realised Matt was the one for me.

Three and a half years later, we are 18 days away from our wedding, we have bought our first home and we are parents to our beautiful fur-baby, Harvey.

Matt and I balance each other in so many ways, and we are continuously learning from one another. We are totally, madly, deeply in love and can’t wait to spend the rest of our lives together as husband and wife.

2) Tell us about your proposal?

Matt and I had known for a while that we wanted to get married, and we had visited Nolan and Vada in January of 2019 to discuss the kind of engagement ring we were interested in having made.

Being the impatient person I am, I was eagerly awaiting a proposal. I didn’t know if Matt had purchased a ring or when he wanted to propose, but nevertheless, whenever we went on a date or holiday, I was always on high alert that he may pop the question at any moment.

Much to my disappointment, months passed and I had lost hope that there was a proposal on the way. Little did I know, Matt had my ring made and asked my father’s permission to marry me months prior.

Matt wanted more than anything to surprise me, and he knew this would be a hard task but that is exactly what he did. On the morning of the 8th of September 2019, I woke up after having fallen asleep watching a movie on the couch with Matt the night prior.

When I woke up, I realised Matt wasn’t there and I could hear him fossicking around somewhere in the house. I called out to him and he told me to go back to sleep and that he would make me breakfast.

The next thing I remember was waking up to our dog Harvey licking my face and Matt standing next to him saying “Wake Mum up.” I woke up and a moment later, Matt was on one knee, in the middle of our lounge room, with the most beautiful ring twinkling back at me.

2) Tell us about your Nolan and Vada engagement ring and why you chose it? 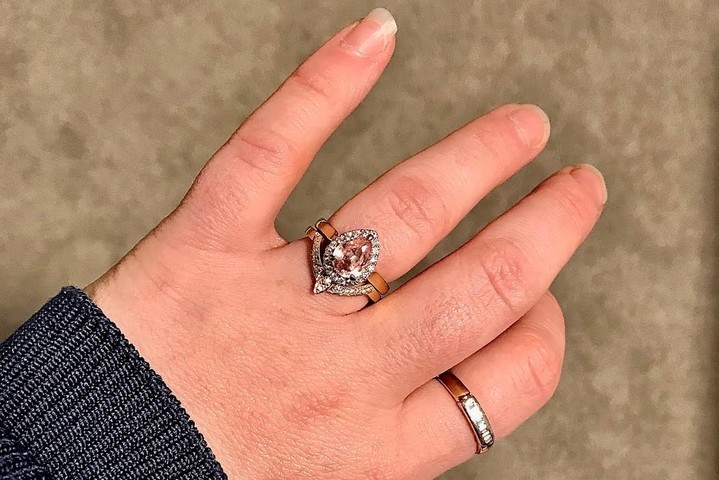 The two rings that Matt and I had made with Nolan and Vada were based off an image I had seen and had fallen in love with. I loved the idea of a peach sapphire for an engagement ring, and wanted a minimalistic band so the sapphire could really shine.

It is the most beautiful ring I have ever seen and I stare at it as much now as I did when Matt and I got engaged over a year ago. I cannot wait to finally be able to pair my wedding band with my engagement ring come the 17th of October.